You could spend hours just gazing at this book’s enticing endpapers – but it gets even better inside. 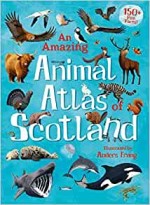 Perfectly pitched to engage the youngest of wildlife-lovers, An Amazing Animal Atlas of Scotland is packed with facts that will fascinate and surprise readers – whatever their age. For example, did you know that limpet’s teeth are the world’s strongest natural material, or that a badger can eat 200 worms a night?

Rather than viewing Scotland’s wildlife purely geographically, this special Atlas splits species according to landscape, with sections on sea and coast, rivers and lochs, mountains and forests and grasslands. It’s an approach that really helped our young readers to grasp the concept and diversity of habitats, and they particularly enjoyed studying the illustrated maps to see which of their favourite species they could find where.

With illustrations that are both lovely and lifelike (otters and basking sharks were our favourites) snippets of humour, and lots of clever comparisons (a puffin weighs the same as a fizzy drinks can!) to aid our understanding, this is a book that we will return to again and again – and we’ll be getting extra copies for gifts as well.