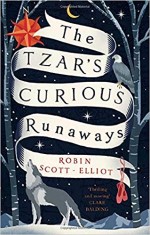 Katinka’s life as a dancer in the Tzar’s circus comes to an abrupt end when her powerful benefactor dies and she must flee St Petersburg’s Winter Palace in fear of her life.

She stands out for many reasons – her quick wits and quicker feet among them – but her ‘hunched back’ (which saw her trafficked into the Tzar’s bizarre human ‘collection’) makes blending in impossible, and she is a target wherever she goes.

With soldiers at her heels and the threat of wolves, and worse, ahead, Kat travels towards a home she can barely remember. She day-dreams of reunion with a long-lost family, though she has a fierce and loyal family- of-sorts at her side already, in fellow runaways Alexei the Giant and Nikolai the Dwarf.

The trio face prejudice and violence at every turn, and are driven as much by fear of what they have left behind, as hope for the future. But they become a challenge for any opposition, not just despite their differences, but because of them – employing survival skills developed over years of abuse, and strengthened by their sibling-like bond with each other.

Inspired by Peter the Great’s real Circus of Curiosities, The Tzar’s Curious Runaways transports readers to a vividly-drawn, almost cinematic version of 18th century Russia. It is a gripping read, with a cast of compelling characters (especially feisty Katinka) whose adventures keep the reader under a spell throughout – even if the story itself only hints at the presence of magic.

The Tzar’s Curious Runaways, by Robin Scott-Elliot (Everything with Words)