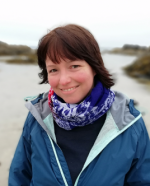 Barbara Henderson’s novels offer young people an enticing window into the past, from the Highland Clearances to the Solway smuggling scene. Her new book, The Siege of Caerlaverock (read our review here) goes back even further – to the Middle Ages.

We’re delighted to welcome Barbara for this guest post, in which she reveals some of her research secrets and explains how a visit to a real-life heritage site inspired her latest fictional world.

Who doesn’t love a castle story? I grew up in a culture steeped in folklore and fairy tales.

Germans love their castles and their medieval history, although the appeal is pretty universal, surely. I remember one of the core day trips of my childhood: we would take any visitor to Schloss Homburg a short drive away. I will never forget walking through the gates, the narrow spiral staircases, the heraldry and history. By crossing the threshold, you simply stepped into a story. Heritage sites have that power!

Fast forward to our years in Aberdeenshire as a young family. The membership to the National Trust for Scotland more than paid for itself! Every single weekend, we would structure our plans around events and re-enactments at the nearby castles. We breathed history through joining Roman legions (watch my young son live the dream in the picture), jousting, Jacobite battles and, erm, teddy bear picnics, but you get my point – these were places of refuge, of beauty, of new impulses and past heritage.

And then came Caerlaverock. I was in the middle of researching a previous book, the Robert Burns novella Black Water which was set on the Solway Coast, so what better place to drag my unsuspecting family for a holiday than gorgeous Dumfries and Galloway.

The weather, it has to be said, let me down badly. After days cooped up in a cosy holiday cottage, we simply needed to get out, despite the drizzle. ‘Ha! There is a castle not far away! Let’s go there,’ I announced, dragging my reluctant teens to the car through the mud.

And Caerlaverock Castle did not disappoint. Granted, my castle photographs of a dreich and drizzly day will never compete with the professionals, but I was unexpectedly assailed by a story! The exhibition told of a siege in the year 1300. The photograph shows my daughter beside some of the missiles which were catapulted at the castle that day. My husband and son charged across the drawbridge in a mock attack, and I was lucky enough to get a picture of that too.

It was done. Siege engines, the roar of three thousand soldiers, the clanging of metal and the crumbling of stone – all of these stormed my imagination right there and then, and there was nothing I could do to resist. I began to take photos of displays, pick up every leaflet and my husband soon began to recognise the signs.

‘So, you’re going to write about this?’ he asked with a wry half smile.

‘Yep,’ I answered from underneath my teetering pile of gift shop goodies and castle merchandise. ‘I think I might!’

P.S. If you want to help a heritage organisation through these difficult times, the best way is to take out a membership. The websites of Historic Scotland and the National Trust for Scotland are a good place to start if you’re considering that – or looking to uncover the highlights of your own local heritage.