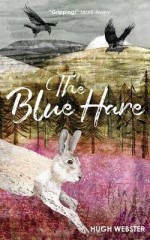 With its focus on a pair of long-eared siblings fleeing incomprehensible horror, it feels natural to draw comparison between The Blue Hare and Richard Adams’ Watership Down, but while Hugh Webster’s recent book shares empathy for wildlife and an eye for nature’s details with that classic, it is slimmer and faster- paced – and shines a light on issues that are both contemporary and long-standing.

The Blue Hare follows Snow and Leap, two mountain hares born and raised in the relatively predator-free comfort of a Highland grouse moor. An encounter with magpies in a trap marks the first of a series of disappearances that alert the youngsters to impending danger, but disaster still finds them, and they are forced to run for their lives – beginning a journey that it will take courage, instinct, and energy to survive.

There has been significant recent coverage about the illegal killing of raptors on Scotland’s estates, but this story focuses on a less high-profile, though no less endearing species, and informs readers about the devastating impact land management schemes can have upon it. The scenes describing a hare cull and its aftermath are particularly powerful.

The Blue Hare delivers an important message with a sensitive touch. It highlights some barbaric human practices, and shows the wild as a brutal and dangerous place too, but it is also a celebration of Scotland’s spectacular landscape and the creatures who live in it, which takes particular care to cherish the quirks and characteristics of the little ones.