The summer break is approaching fast, and we know where the Roaring Reads gang are heading on our first outing – to Moat Brae, Scotland’s new centre for children’s literature, in Dumfries.

The attraction opened at the start of this month in the restored Georgian property that was once JM Barrie’s inspiration for Peter Pan.

As well as exploring the gardens where Barrie played as a boy, visitors can tour a recreation of his 1870s world on the ground floor of the centre, or visit the reading hub on the second floor, with a library and plenty of cosy spaces to enjoy the books. The top floor attic area is inspired by the Darling children’s nursery, with lots of interactive games.

Joanna Lumley, the project’s patron, said: “The moment you step into Moat Brae you understand why JM Barrie called it an ‘enchanted land’. It is fantastic that children and young people everywhere can now have the chance to enjoy its magic.”

The launch of Juliette Forrest’s new book, the True Colours of Coral Glen, will double as a celebration of some of Scotland’s finest middle-grade writing talent. The event, on July 11th at Waterstones Glasgow Sauchiehall Street (6pm) will see Juliette introduce her eagerly-awaited novel, and she will be joined by authors Barbara Henderson (Punch) and Victoria Williamson (The Fox Girl and the White Gazelle) and poet Louise Peterkin. With readings and discussion, it looks set to be a wonderful evening for writers and readers of all ages.

It’s set to be a busy summer of book launches for Hebridean publisher Cranachan, who will celebrate the release of their YA historical title Girl in a Cage, by Jane Yolen and Robert J Harris, at an event at Waterstones St Andrews on June 20th. Shortly after, the non-fiction title Scotland’s Animal Superstars, by Kimberlie Hamilton, launches at Oban Waterstones on July 6th.

Over 400,000 songs and rhymes have been listened to so far in the Bookbug App, which the Scottish Book Trust launched in January.

The app gives enables wider access to the popular songs that feature in Bookbug’s community song and story sessions, and the traditional songs within it are proving particularly popular – Katie Bairdie has been listened to over 16,400 times and Ally Bally gained more than 15,700 listens.

Modern nursery rhymes have also been a hit, with Sprog Rock’s Nursery Rap gaining over 17,800 plays. We can see why – have a listen, it’s brilliant!

To celebrate Bookbug week in May, several new songs were added to the app, and you can now enjoy the Jeely Piece song, Tiny Tim the Turtle, and the Gaelic Welcome song Halò a h-uile duine, Ciamar a tha thu?

Alexa, read me a story…

There were howls of horror from the kid-lit community in May, when a survey claimed that as many as a quarter of parents had turned to ‘home assistant’ apps like Siri and Alexa, to tell their children bedtime stories.

“If the parent is there and they’re sharing an audio book together, then that’s brilliant,” said Coo. “What makes me sad is the thought of somebody being left on their own with some audio, and there isn’t that parent or carer connection – because I think a story is about a bonding experience, and a sharing experience.”

Empathy Day, on Tuesday June 11, aims to mark the importance of developing empathy, particularly through reading stories (as this enables us to see things from other points of view – and has been proven to help build our empathy in real life.)

A ‘Read for Empathy’ blog tour has been taking place this week, with participants including Scottish authors Louise Greig, who discussed the emotions in her picture book Sweep, on the Library Mice blog, and Victoria Williamson, who will feature on the Library Girl and Book Boy blog on Friday June 7.

There are some fantastic festivals coming up across Scotland over the next few weeks, with many placing a welcome emphasis on children and families.

Glasgow’s month-long West End Festival will include several book events for younger readers, starting with Chae Strathie at the Kelvin Hall on Saturday, June 8. The Dear Dinosaur author’s story show is the perfect accompaniment to a visit to the T-Rex exhibition at the same site. 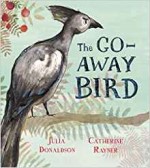 Julia Donaldson and Catherine Rayner bring their combined star power to the West End Festival on Saturday, June 22nd, when they will appear at Glasgow University’s Kelvin Gallery, talking about their new book, and Go-Away Bird, and other hit stories.

There is plenty for older young readers this month too. The Cymera Festival, Scotland’s festival of science fiction, fantasy and horror writing, from June 7-9, will feature appearances from Kelpies Prize winner Alex McCall (Attack of the Giant Robot Chickens) Liz MacWhirter, PM Freestone and Lauren James.

The Borders Book Festival, in Melrose, from June 13-16, includes a busy Family Festival, and this year’s programme features appearances from Cressida Cowell, introducing The Wizards of Once, Chae Strathie, with a show about ‘So You Think You’ve Got it Bad – a Kids life in Ancient Greece, and One Button Benny author Alan Windram.

The Edinburgh Book Festival programme is due to be announced today. We’re looking forward to getting a good look and making some picks from the children’s events – but that will be another whole post for another day…